Elevate the thinking and understanding of how sales should be done. It's time to move away from sales-bro tactics of dialing for dollars, 24/7 hustling, and thinking of sales as just a daily grind. Call and email metrics don't outweigh pipeline and wins. Working from home doesn't mean a lack of work ethic. Working smart and not hard should be the norm, not the exception.
425
Created by Belal Batrawy
Top members

My name is Belal and I'm striving for a purpose beyond material things or self-interests, for excellence in actions, and in giving back to others. I want to see these things exemplified in the world of business and this community is here to bring other like-minded people together.

Many of us are strangers, so use this thread to introduce yourself. Please comment with:

This our space to bring about the change in sales we wish to see. Looking forward to hearing from everyone and being on this journey together!

François Bourdeau
Senior Account Executive at Encore Business Solutions
Delete comment
Hey everyone, I'm Francois Bourdeau. I've worked in tech since 1999
I work for a Microsoft partner - Encore Business Solutions in Western Canada.
The last 10 pre-sales and sales.
I'd like to learn more about some of the methods your using for prospecting. Also curious how your integrating your prospecting & other marketing with LinkedIn.
I haven't bee...See more
Bravo • 0
Reply

Where I work: Aurea Software, based out of Toronto, Canada

Time in sales: Just started my first SDR earlier this month, but have been prospecting in previous roles for almost 2 years.

What I'd like to learn about: Prospecting methodologies and processes that scale from SMB to Enterprise, and career path...See more
Bravo • 0
Reply

-I work at ASLAN Training (25 yr. old customer service & sales training co. out of ATL, GA).
-I've been in sales for 15+ years. (Registered Rep, Adult Education, SaaS, & Training)
-I'd love to learn all the names and contacts of all the companies (with budget) who need customer service and inside sales training :-)
-Dream vacation...See more
Bravo • 1
Reply
Join #Death2Fluff to comment this post
Join Now
New post
My intro - Hi all!

Molly O'Sullivan here and I work for the AA-ISP (global inside/digital sales community).

First earned a commission when I was 4, so I've always been and wanted to be in sales. Professionally selling for 13 years.

I'm endlessly curious and like to learn about everything.

Aside from wanting to take the Alaskan cruise I've already taken again, I plan to head back to Europe many more times for vacation.

You ever take something for granted, just to realize later how much value you were belittling?

Happens all the time in #sales, especially newer reps. They treat the prospect like a customer, which is nice in theory but not correct. You'll see inexperienced reps over-committing by:

2) Discounting and bundling too heavily

3) Being overly available and not respecting their time

And so on. We call this giving the steak without the sizzle. There's this point, and it's not always very clear, where you give too much without enough reciprocity (#psychology), and that overvalue becomes the norm. Once the standard is set of taking without giving, the expectation doesn't go away.

It's rather dangerous and derails deals. The prospect will focus on what they don't have instead of what they do have and the seller can't bring ...

Benjamin Adams
Enterprise Account Executive Belgium at Intuo
Delete comment
I fully agree with this post. In our company, we typically would say: "Get to give". If your prospect wants something, then ask something in return.

Allthough, how hard this may seem from a business development perspective, don't forget that most C-suite people, VP, Directors or whomever are probably well skilled in some topics, but probably not as...See more
Bravo • 0
Reply

Debbie Barnes
Enterprise Sales at Taggstar
Delete comment
I am definitely guilty of doing too much work for my clients!! I do things that really should be on the customer in order to try to speed up the sale, but I see that if I am doing everything for them then when it comes to the customer actually having to lift a finger and get a contract signed, it may suddenly seem like a huge leap in expectation on...See more
Bravo • 0
Reply

Ron Arellano
Senior Creative Director at Search Business Group
Delete comment
Hi Everyone! I got the great opportunity to meet Belal in person and I'm ready to share my little experience and learn from the pros. There is so much to learn yet. Business developing is a science and I have so much respect for the profession.
Bravo • 0
Reply
Join #Death2Fluff to comment this post
Join Now
New post
I know sellers that make fake dials to look busy...
I know plenty of sellers that do fake dials to phone numbers that never answer to boost their activity.
I know sellers who get points for activities like calls. Even if their pipeline is sufficient and they're ahead of quota, they'll get in trouble and shamed for missing activity points.
I know sellers who show up to work at +8am daily, not because they're eager to work, but because it's important to look busy at your desk. They then spend the morning reading news, on Facebook, or playing games.
Are activity metrics total crap? How do we solve for the prevalent problem in sales?
My take is we need to track the right metrics:
Email Sentiment

Pipeline Generated by ICP vs TAM

As a seller, you must be a wordsmith:

Be mindful of your words. There's actually a lot of #psychology behind the words you choose to say. For example, cheap has a negative connotation, while lower cost is associated with affordable.

The basic guidance is:

What other examples are there in #sales ? 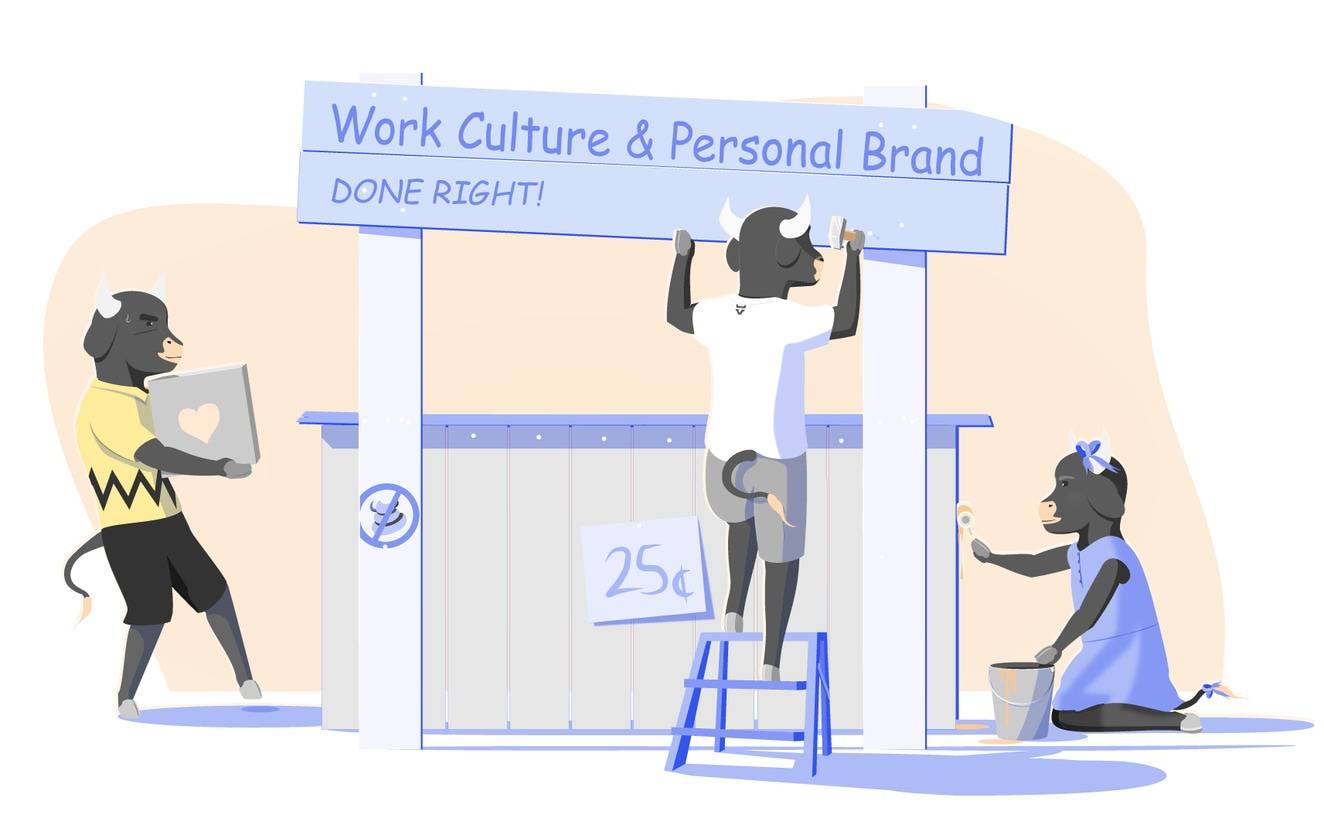 Building Work Culture and Personal Brand
A playlist of thoughts and advise on how to build an inclusive culture and personal brand.
Play Now
2 posts
Presenteeism... a telltale sign of "bro-culture"
Getting Strong-Armed on your Quota?
#Death2Fluff

Salespeople-- You need to add some friction to your follow up!!

The next time a prospect asks for an email with more details, before sending try this instead:

Send an email that only says "Hey (name), let me know you got this email with a quick response to confirm I didn't end up in spam and I'll send you the details you requested from our call."

Why add that extra step of friction???

1) Foot-in-door technique: by getting someone to agree to something small (like responding "Got it") you increase the chance of them doing something bigger (like your email's CTA).

2) Consistency: We as humans like to be consistent. It's a core part of our psychology. So by having your prospect respond, they are less likely to go silent.

3) (dis)Qualifying: If they won't respond to a simple one line email, then high odds they weren't going to view your links and r...

In one of my sales jobs we had to report our calls and meetings from the previous day every single morning in the team huddle.

I always thought it was more for shaming those that didn't hit their numbers, plus the vanity for some to show off what they did.🙄

We had to make +75 calls a day, even if you hit your meeting number. I'd normally hit my meeting number by early afternoon, so I had this list of companies I knew never answered their phones and I'd call them to fluff and pad my call count...

See if I tried to get more meetings, because I took my time to research accounts, I'd only get about 50 calls for the day. And that simply wasn't acceptable, because I clearly wasn't putting in the right effort...😅

So there I was, the #1 rep, doing fake dials all afternoon to hit my +75 calls instead of actually trying to get another meeting.

I got called into the office by my Director as soon as I walked in.

I had been refusing to sign my new comp plan. My Director (falsely) told me I was the only seller of +150 in the company who hadn't signed the comp plan and now the EVP was aware.

They wanted me to have the same quota as people with 10-20 years more experience than me AND take a base pay cut of $30,000 because of my lack of experience.

I responded "You're well aware why I haven't signed. On the one hand you tell me that I don't have experience so I get a significantly lower base. I get it, and it makes sense that I shouldn't be paid the same as people with +15 years experience.

But on the other hand, you tell me my quota is the same as theirs. If I don't have the experience, how exactly am I supposed to sell as much as them?

Raise my base to theirs or cut my quota by the same ...

It was about 5:40pm and I was ready to leave. My colleague was about done too, so I waited for him so we could walk out together.

We sat right near the elevator doors, so as we get up I start walking left towards them and he starts walking right away from them and we bump shoulders.

I give him this look like, 'What are you doing man?' He says he wants to use the other doors way on the other side of the office.

I'm like, 'Why go all the way over there?' He tells me that way we can pass in front of the CRO's office and he can see we're leaving past 5:30pm.

I couldn't help but smile and sort of laugh. He was right!!

See, we were in a very "#sales bro" environment and that fake presentation of working hard was just as important as actually working hard. I couldn't help admire how clever he was while also thinking how dumb the job was.

Belal Batrawy
Enterprise Account Executive at Clearbit
Bravo • 2
Join #Death2Fluff to comment this post
Join Now
Sign Up - Flip The Script National Bus Tour!!
Sahil Mansuri posted 9 days ago
10
7
Welcome!
Bravado Team posted 3 months ago
10
19
Women Sales Keynoters - please share
Lori Richardson posted 1 day ago
1
3
✕
✕
✕
✕
Contact Bravado
Please give us 24-48 hours to respond to your message.
✕
Bravado Score
Build your track record of success
What is the Bravado Reputation Score™?
The Bravado Score is a proprietary measurement of how much expertise you have earned on Bravado. Your Bravado Score is increased every time you close a deal with a new company or get a testimonial from a customer.
How do I increase my Bravado Score?
Got it
Platinum
1,000+
Gold
800 - 999
Silver
500 - 799
Bronze
300 - 499
✕