The Tea has Been Spilled! See Who Made it on our Naughty or Nice List
Official thread 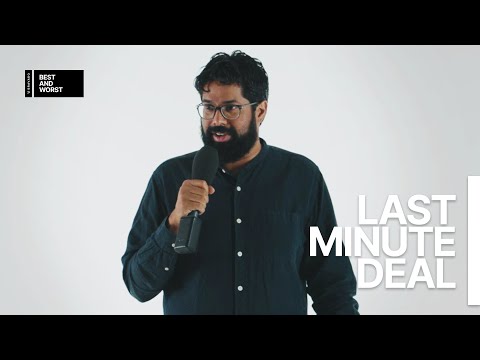 The world of last-minute deals is a wild and unpredictable one. A game of cat and mouse. The stakes are high and the pressure is on. If you come out victorious it’s a feeling like no other. But if you lose it at the very end, it’s a depression like no other.

In this video, Sahil talks about his Best and Worst last-minute deals. The best one was where the buyer went beyond their call of duty and went to the extent of finding a free WiFi of Starbucks to sign a contract, just because they were treated well and had an excellent relationship throughout their buying process (doing good for others is always a good strategy).

And the other, a missed slam dunk. Where the customer signed the contract but sneakily changed the pricing on the contract. And then claimed that they were being duped. Which led to a long legal battle and let me tell you, it was not pretty.

Last-minute deals are a game of high stakes. With the right approach though - you can come out on top. But remember to always have a backup plan. Because you never know when the rug might be pulled out from under you.

What’s the Best and Worst last-minute deal you’ve had?

PS: Do check out other videos from this series:

Sort by:
Best
haha checking every last detail after getting a signed contact is such a good call.

more often than not, its to catch MY mistakes......but also to not let the customer pull one over on ya!
Ours are also checked by our contracting team - the ones who released the final version and have the terms locked down.
Best last minute deal? Happened this past December, and it was more like a series of deals. Last week before my company broke for the holidays, I was driving all across my state and calling in favors face to face for myself/the rest of my team who had deals in the territory. 4 of the 7 people that I met with in that final week ended up signing before end of year.
I have NEVER pressured a customer to close a deal so I could hit quota. That is a naive approach akin to sacrificing a Queen for a Pawn.

Deals close when the perceived value gained of purchasing exceeds the cost of purchase. That is the only ‘pressure’ I apply, if I fail at articulating the opportunity cost then it’s on me.

I have not ever carried my quota into a relationship with a client. So I’ve never been in a position where I tied a deal to my time frame.
That is an absolutely insane move to copy/paste and add a lower price. Not only to do that, but then deny you did it. That is insane to me.

Like does this person, think they are the best negotiator ever. Are they doing a TED talk titled, "How I Get 50% off of everything"
Reminds me of that guy that tried to buy that toothbrush for a penny because the sticker on the shelf was a misprint lol
I would never tell a prospect o need their deal to hit quota. Gives them too much power and it’s just not me.
I once needed a small deal to close to hit my quarterly quota. On the last day of the quarter, literally around 8pm, I had a prospect tell me on a phone he would sign the form. I send the form over and a couple hours pass. Im texting and calling the guy as we had agreed on a price adjustment for him to sign before EOD. Finally, around 11pm, I call his cell and he answers and informed me he was blind and needed help from someone to sign the order form he was just waiting for someone to assist and he would get it done. Order form was signed right before midnight. We met off camera and I didn't do enough research on the guy because he turned out to be a fairly well known blind attorney.
If you are looking to stake Bitcoin on autopilot? Make inquiries about timebrook investment or visit https://timebrookinvestment.com/u/sign_up?r=Celestine
And click the link below to sign up
https://t.me/+L_3GDbXlz904MDg0
@Gasty- more spam.
The hell is going on?
Taking care of this right away

And the "Worst Manager of the Year" award goes to....(drumroll)

*Upon sign up we require LinkedIn Authentication to verify that you are a sales professional.