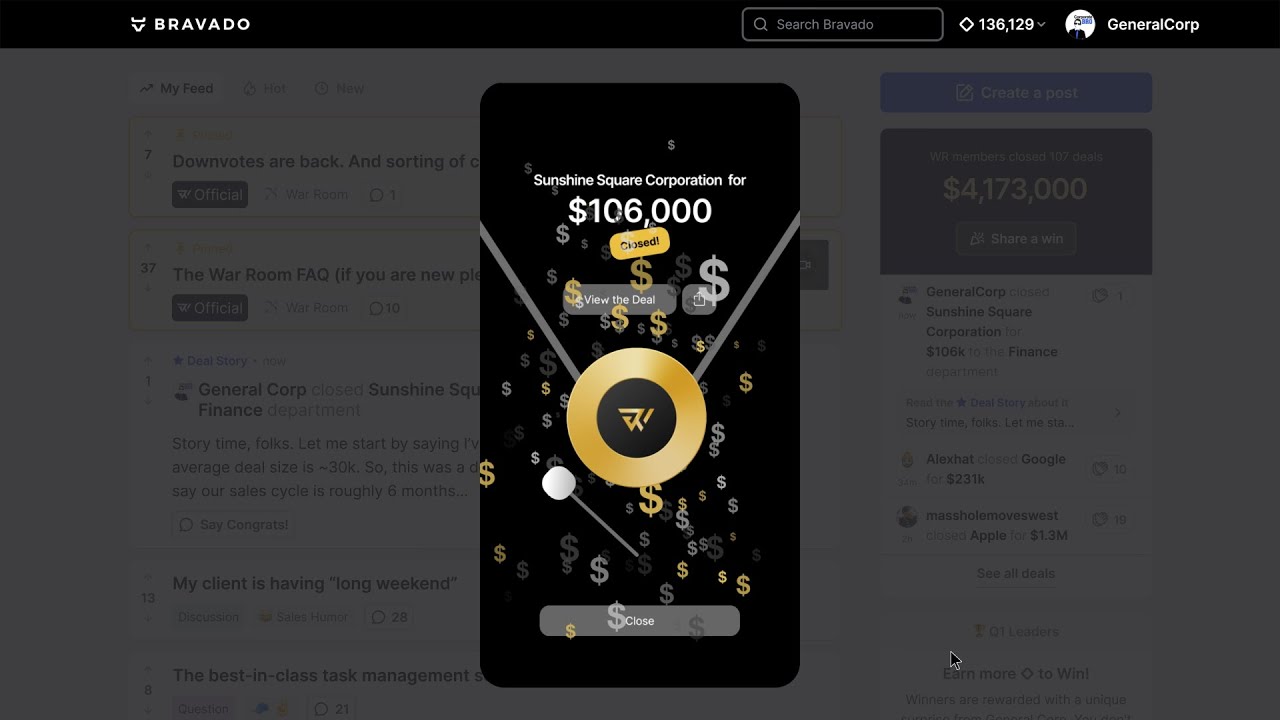 Don't you miss the rush of closing deals and having the rest of the floor congratulate you despite the fact you know they are competitive and secretly kinda butthurt?

Introducing: The Win Wire. Now you have the ability to post about deals you have closed, share deal stories and collect both kudos and Commission*. Now before rushing to ask a bunch of stupid questions I'd recommend you watch the tutorial video we put together and read the FAQ below. They are pretty tite.

If you have questions after that, drop 'em as a comment below.

We created The Win Wire so we could all share deal stories and get better from one another!(but also feel dope cuz closing deals is SICK). I know personally I've forgotten about a lot of deals in my life. This is a great opportunity to start tracking all the success you've had in your career and do it with the global sales community.

I look forward to reading about your successes!

The Bravado Team is expanding the feature for all sales roles. You set up a kickass qualified meeting? Don’t worry, you will be celebrated. In the meantime, enjoy reading some deal stories from your AE friends.

Would my identity be revealed?

You have full control over what you share about a deal by toggling the privacy setting of the company and department names. Of course, don’t carelessly blast your own name or your company’s name in the deal story if you wish to be stealthy or have NDAs signed.

Where do my deals go?

They will show up on the win wire, the post feed if you include a deal story, and your War Room profile. You can edit and remove your deals anytime.

Reporting fake data may result in a ban from the platform. We selectively check deals and may require verification.

Smash that clap button on the win wire, upvote the deal stories you find inspiring, or comment “congrats” on a deal story post. Sales is tough, show your War Room fam some love. We are in the trenches together.

You only get rewarded commission (+8) if you share the deal story with your deal.

Members who find your deals inspiring or impressive will support with claps and/or upvotes. You won’t receive commission for claps on your deals, so don’t game the system.

📈 Closing
🏹 War Room
41
12 comments
Sort by:
Best
Re
RedLightning
Politicker
+5
AE
Very cool! Gong rips are one of the things I miss the most about an office. Could this get it's own tab? Like have the tabs be "trending", "Hot", "New", and "Win Wire"? @GeneralCorp @sahil
poweredbycaffeine
Politicker
+7
Bean Juice Drinker | Sales Savant
Feature Request @sahil : Create a tab at the header of the site next to "Trending" "Hot" "New" tabs to include the "Win Wire". It's flooding the feed and drowning out standard posts.
BigMeech
OG Sales Savage
+9
Senior Account Executive
Wooo! It's finally here! Excited to see all the massive success the fellow savages here have :)
Chep
Arsonist
+9
Business Development Team Lead
This is dope but please tell marketing that DUB DUB is a sick name for it as well🤝😤
Austin
Celebrated Contributor
+6
Founder - ** ***
Seconded. Dub Dub is dope.
CadenceCombat
Tycoon
+13
Account Executive
Loving the Win Wire so far.
CuriousFox
Arsonist
+10
Senior Account Executive
Me too Cadence! It's great motivation too 😎
MsTech
Catalyst
+5
Business Development Executive
The dub-dub... LOL.  Love the idea! I'll have to keep my deal ANON though...
FarmingU
Politicker
+6
Account Manager
Great idea bro! Missing a little bit the collective celebration and paid rounds after a great day :D
Jackywaky
Politicker
+7
Sales Manager
cool beans
slaydie
Politicker
+3
Account Executive
Great idea! Let's celebrate each other and brag about all that $$ we are closing
Austin
Celebrated Contributor
+6
Founder - ** ***
Tell marketing to fuck off. “Dub Dub” is dope. The Win Wire is a badass concept.